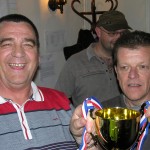 Jeff and Kevin, with Sam in the background

Congratulations to Kev Baker and Jeff Fraine who won the Cheney Champs Petanque Cup on a Sunny Day at the Cheney Arms.  After a shaky start Kev’s experience shone through as he and Jeff took the first game 13-8.  This tournament is the first time Jeff has played petanque and he really rose to the occasion.  After taking quite a big lead in the second game Richard and Vic started to come back into it and it looked like a third game could be on the cards but Kev and Jeff came back to win 13-10.  Cheney Knights’ Captain Sam Burdett wishes to thank everybody who played and supported the competition and a big thank you to Dave Cane Electrical Services for sponsoring the tournament.    The cup brought more people into petanque and hopefully the competition will return in 2013. Well Done Kev And Jeff.       Sam Burdett

Cheney Knights petanque team captain Sam Burdett organised the knockout competition which was sponsored by David Cane Electrical Services.  Some 32 people entered and Sam put them into 16 pairs.   The results in each round are given below.

Round 2 Matches and Results.

Round 1 Matches and Results.

This site uses Akismet to reduce spam. Learn how your comment data is processed.