The Gaddesby Gallop is a five and a quarter mile cross country race held on a Saturday morning before Christmas. 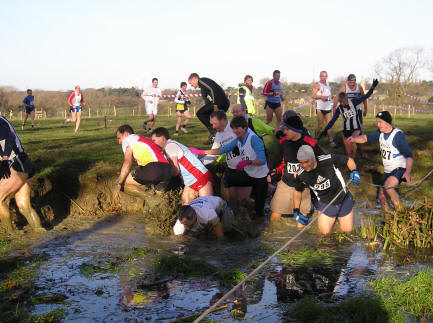 It was first held in 2002 along a route between Gaddesby, Barsby and Ashby Folville devised by Jeff Bodycott and Dave Ford.  The course was slightly lengthened the following year and officially incorporated the dew  pond – through which 2002 winner John Collingham had led the first race.  The route also incorporates a length of four foot diameter drainage pipe and a wade along a length of the Gaddesby Brook.

Past winners include Gemma Steel, now a member of the Great Britain Cross Country team, who held off Sally Newman in 2006 despite running with one stockinged foot having lost a shoe halfway round the course.

The race was revived in 2011 by Lance Shaw and Jeff Bodycott.  The winner, Mark Powell of Wigston Phoenix,  set a course record time of 30:04.  Lance and Jeff intend the race to be an annual event and have put together a trophy with the name of all the previous winners wich takes  pride of place in the Cheney Arms.